Following a needed day off on Monday, the CEM 900 leg 3 team met at John’s house Tuesday morning ready for the three-day ride to the finish. The Mother Ship had been cleaned, resupplied, and was ready to go.  Riders for leg 3 include John Elder, Jim Arbuckle, Bob Porter (the senior team), Johnny Phillipich, and Tony Olson (the junior team).  Jay Saterbak, team support driver, was anxious to demonstrate that he could out-navigate and out-cook any of the team’s previous members, particularly targeting Matt Stepanek and Doug Gurholt. 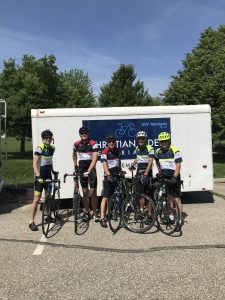 With the RV and bunk/cargo trailer loaded the team was on the road with Jay demonstrating an almost human GPS prowess as he motored along remote gravel roads—all the while assuring the team that he knew the quickest, most direct, route to Hwy 52.

The final leg will be ridden exclusively on the southern Minnesota Root River and Harmony Preston Valley Trail which winds through numerous small towns, wooded areas and along the Root River.  Gravel roads in the rear-view mirror, Jay delivered the well dusted vehicle and its occupants to the trail head in Fountain where they would begin the ride with a mostly downhill run to the campsite on the river near Lanesboro.  Once completed, John expressed interest in having Jay take him back to Fountain six times to create a 62 mile, all downhill ride (something Dennis Hill would certainly frown on).  Instead, however, the team took off on a run from Lanesboro to Preston and back, and a final similar partial run out and back to complete the mileage needed.

As expected, Johnny and Tony were soon out of sight as they rocketed down the trail.  Long legs and 30-40 less years on earth seems to add and element of both easy riding and speed. Tony rides with a new helmet that features a Star Wars like rear light affixed at the back.  The senior team is suspicious that it may involve a secret form of propulsion, something Tony and Johnny emphatically deny.  About half way on the run to Preston, John rounded a bend and found Bob on the ground, and Jim and another rider working on a damaged bike.  Jim and Bob had been riding side by side for several miles, enjoying the beautiful trail and sunshine, when they were caught off-guard by a rider coming from the other direction, with the result involving hard contact between Bob’s front tire and Jim’s rear; in fact, their wheels locked. Bob went down hard and received numerous abrasions, a bruised thumb and swollen ankle.  Jim was not hurt, but his bike was damaged beyond riding—or so it was thought. 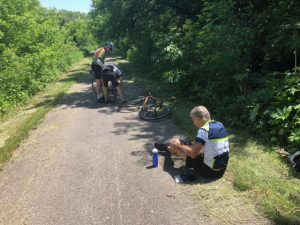 Jay made an emergency run with the RV to assist.  Jim and Bob were determined to continue the day’s ride.  With Jim’s bike out of service, and it was discovered that Bob’s front tire was bent, Jim switched the front wheel from his bike onto Bob’s.  Jim contacted a bike shop in Lanesboro, arranged to rent a bike, and soon the team was back on the trail, Bob scraped and bruised, Jim sitting upright on a high handlebar, tractor seat bike, with John amazed at their determination.

Meanwhile, Johnny and Tony were unaware of the other’s trouble on the trail, and were making rapid progress on the 62-mile run. When seniors and juniors eventually met in Preston juniors were riding to the finish while seniors were barely beyond the half way mark. 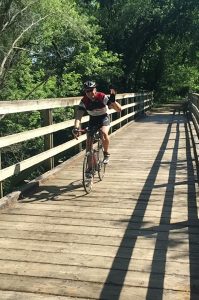 To complete the senior group ride, Bob, riding without a speedometer, and more importantly, without an odometer, rode well out front. Unfortunately, he was the only rider that would not be able to know the distance being covered.  Jim and John eventually found him near a World War Two military tank display in Preston—five miles beyond what was needed.   Riding back to camp, the junior riders were crushed to learn that the wounded, rented bike, senior team had logged 67 miles for the day.

While Jay cooked up ribeye steaks, corn on the cob, and veggies in a cast iron kettle, the team headed for the camp showers, only to learn that the showers needed 50 cents each to be activated for five minutes. Fortunately, Johnny and Tony, previously aware the cost, had plenty of quarters available.  Never-the-less, there was team grumbling about the concept of pay to play showers.  However, the issue was quickly forgotten when dinner was served.

After dinner, while the team cleaned up the dinner ware, Jay administered first aid to Bob’s injuries.  Jay, being an ex-fireman, and brother of a doctor, is proving to provide an all-service support driver talent. 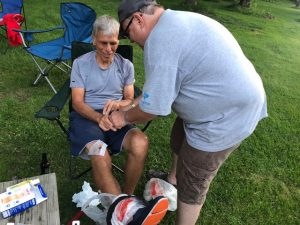 To finish the day, Jay served apple cobbler, made in a charcoal heated, Dutch oven, with ice cream.  Jim is currently on an all-vegetable, no sugar diet.  Because he did not try the cobbler, the rest of the team made up for it by eating two servings each—except for Bob, he made three trips to the Dutch oven.

Johnny and Tony retired to their tents, pitched next to the Root river, still wondering how the senior team had left them so far behind with their 67 mile ride.