The 13th Annual Merchants Bank CEM900 is officially underway!  The ride is starting a day early this year to accommodate schedules, and we will have a rare day off between the 2nd and 3rd legs.  Along with John and Dennis on the 1st leg are Justin, John K., and Kyle with senior support driver Matt.  The mother ship will be a little tight for three days as 6 people is about the limit. Hopefully this closeness will not test any friendships. 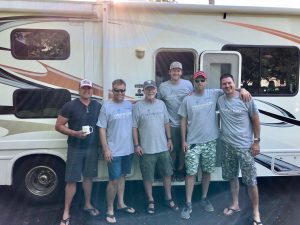 With a long day ahead of us we got an early start at John’s house in Bloomington, making final preparations and loading bikes and gear.  Driving out of John’s neighborhood Matt missed the very first turn and took us for a spin through a cul de sac down the street.  This does not bode well.  Back on track we headed north for Hinckley, noticeable grumbling about the coming task ahead as we neared the kickoff point.  Despite this, everyone seemed fired up to get riding once we reached the trail head.  Matt seemed particularly happy! 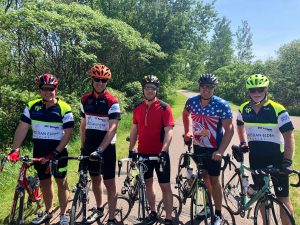 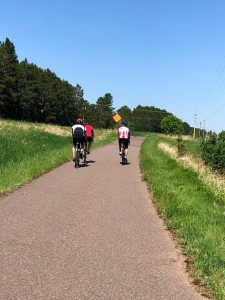 Some days not much happens on the trail; this is a double-edged sword for the author.  Today was one of those days.  We rode north from Hinckley on the Willard Munger Trail through numerous small towns, grinding steadily upward into a bit of a headwind.  Matt met us at a couple of stops along the way, including Willow River, the birthplace of Ernie Nevers.  Matt has stated that 2018 should be the “Year of the Support Drivers,” perhaps feeling a little under-appreciated.  We will take his suggestion under advisement… 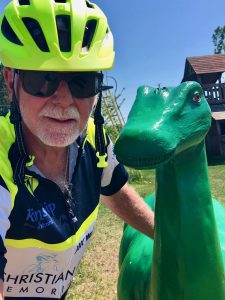 By the time we reached Carlton the temperature had cooled noticeably.  We were so happy that the 100 degrees from Memorial Day did not continue into today’s ride.  Passing through Carlton we were all looking forward to the old railroad bridge over the St. Louis River with a great view of the falls; unfortunately, the trail was closed before we reached the bridge.  We finished our ride with an out and back from Carlton and then headed to Spafford Park in Cloquet for our overnight. 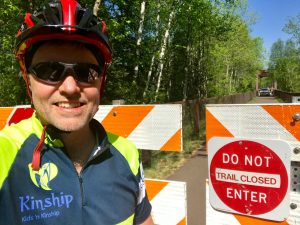 It was here that things became more interesting.  The one road into the campground was temporarily closed due to road construction. Matt passed and pulled in front of two other RV drivers that were waiting patiently at the construction stop, yelling “It’s for the kids” on his way by.  A thunderstorm was bearing down on us as we waited 30 minutes, but we managed to get parked and hooked up before the rain hit.  John K. made an ill-advised trip to the showers, and he ended sprinting back to the RV in a heavy downpour.  Our planned steak dinner was not to be, so we made alternative plans to walk to the Northeaster Grille just outside the campground for dinner. Justin was concerned that we were under-dressed, because their canopy advertised the grille as “Fine Dining.” Not to worry as we stepped inside; we were the only customers in the place and quickly learned that their idea of fine dining is frozen pizza from a pizza oven.  Oh well, the beverages were cold and the pizza was hot, so nobody complained too much.

Back at the campground we finished our night with Sun Drop cake courtesy of super support driver Matt. Matt is doling out tokens for those of us who do and say nice things about him.  I am doing my very best, but it could be tough to hold it together for 3 days.  After dessert the old guys headed to the bunks in the trailer, apparently in need of rest and recuperation for Day 2.  I’m guessing that the boys in the RV were not far behind.