It’s All Downhill From Here, Baby!

While John, Dennis and Jay were sitting around the campground this morning, Brian told us that he had a very odd experience during the night. He awoke around 3 a.m. and had to use the facilities. I use the term facilities loosely, since it actually consists of one porta-potty at the center of the campsites. The campground was sparsely occupied with only a couple of other sites taken besides ours, so Brian felt fairly comfortable strolling over in the middle of the night. Just after he settled in, someone tugged on the door and then knocked. Brian mumbled “occupied” while he was really thinking “Are you kidding me???” We all laughed, giving him a hard time over his very strange timing.

Later in the morning, while Brian was chatting with a fellow camper, Jim came up to the rest of us and said that he had the strangest experience during the night. He woke up in the middle of the night and needed to use the facilities, so he walked over to the porta-potty and pulled on the door, but it was locked. He knocked on the door, but somebody replied “occupied”, so Jim walked away, somewhat exasperated. “What are the odds??” he exclaimed to us, as we were now completely in stitches. We called Brian over and pieced the two stories together, enjoying a great laugh at the expense of our teammates.

After Jay fed us a huge breakfast of everything left in the refrigerator, a skillet with fried potatoes and meat and one skillet with eggs and veggies, we departed down the trail. Today was deemed “biker’s choice”, so each rider could choose his or her own route for the day, while Jay and Sherry stayed parked in the campground all day. We all chose to ride west (into the wind) first, Johnny, Dennis and Joy riding to Fountain, while Brian, John and Jim rode through Preston before making their return trip.

Along the trail outside of Lanesboro, Joy was stopped by a couple of cyclists who asked if she wanted to see a rattlesnake. Of course she did! Joy jumped off her bike and snapped a couple of pictures of the timber rattlesnake, which Jay judged to be 8 years old when he saw the picture later in the day. Joy and Kathy got the cool wildlife sightings on this trip, bears and rattlesnakes are much better than mean porcupines and “sea otters” that look like muskrats! 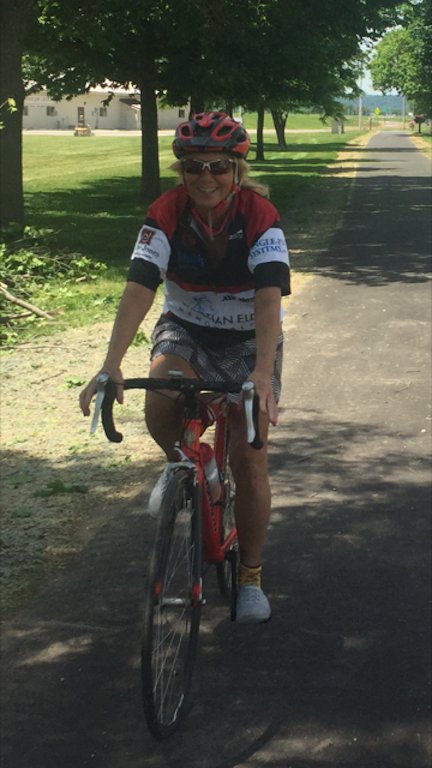 At one point, Brian and Dennis met along the trail. Brian was cruising downhill with a boyish smile on his face as he yelled, “It’s all downhill from here, baby!!” Yeah, well, we will see you in a few hours when you are pedaling uphill into the wind to gauge just how euphoric you look and feel! Actually, we love the enthusiasm! We also love the comradery as we ride. In fact, just yesterday as Dennis was catching and passing Johnny on the hill outside of Houston, Johnny gave Dennis a familiar hand gesture, one that Dennis took to mean “way to go, Dennis”. Dennis was hoping to encourage Johnny similarly today, but never found an opportune moment.

We all finished with a ride out to the east toward Rushford. Although the wind was blowing quite steadily, the shelter along the trail provided great cover. One by one we rode to the finish, and Brian did indeed still look very happy as he cruised up the homestretch. Johnny finished another 75-miler and has set a formidable 3-day record total of 225 miles. A couple of competitive cyclists who bypassed the 2017 CEM900 should take note that the bar has been set. You know who you are, Kyle and Tony! Johnny says bring it on! We look forward to welcoming you back next year. 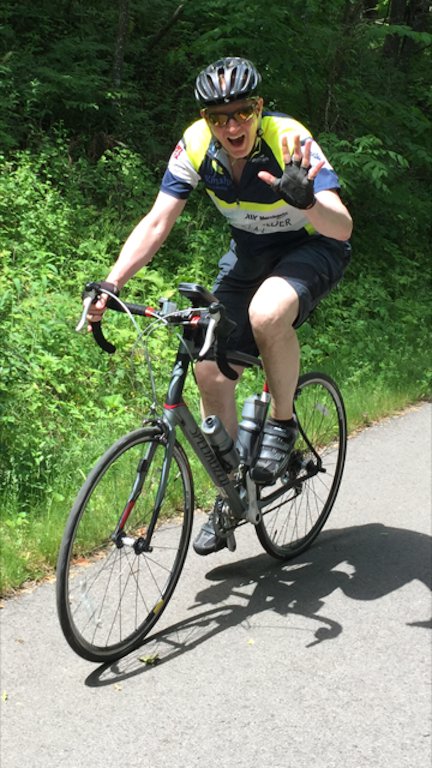 We finished up with fist bumps and congratulatory hugs for another job well done. During the day we had learned that our fundraising total had exceeded our goal amount of $40,000. Thanks to all of the riders, support drivers and contributors! You make it all worthwhile. 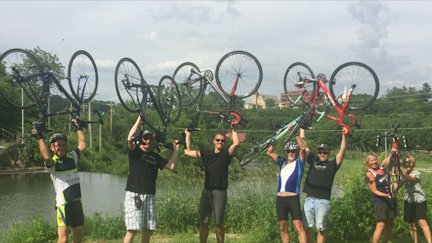 We loaded up and headed for home. But first there was the matter of the Kids ‘n Kinship-provided DQ gift cards to deal with. We decided to stop at the DQ in Zumbrota, where we were joined by Joy’s daughter and grandkids. What a special treat! We finished our drive home, content that we had accomplished what we had set out to do and that the months of planning had come to fruition.

Hope to see you tomorrow for the Welcome Home Celebration at Merchants Bank in Apple Valley!