Yesterday we received a send-off luncheon at the Elder-Jones office courtesy of Merchants Bank and the Kids  n Kinship staff. Most of our record twelve riders and 4 support drivers were able to attend the gathering. Besides introductions and sandwiches and cookies, we reminisced about past rides and riders, mostly humorous (at least in retrospect). Rita Younger with Kids  n Kinship provided us with some additional inspiration with an article she had written called  Why We Ride . We ride in memory of Christian, first and foremost, and we ride for so many kids seeking mentors to impact their lives. It has been a great journey for 10 years, and we are ready to go for ride number 11!

Final preparations have been made, and today John, Dennis and Jim drove from Bloomington to join the rest of the group at Justin s house. Justin was worried about a wobble in his rear tire, and we hadn t even ridden a mile yet. After discussing the unlikelihood of a bike shop fixing it in short order, or perhaps pulling a wheel off one of John s extra bikes, Jim diagnosed the problem and was able to tighten the bearings. At least Justin s hoping that was the fix. 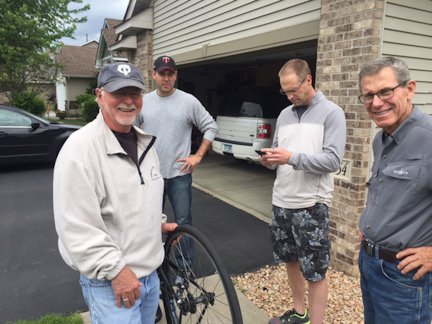 Mike and Matt were ready to go, but there was no sign of John K. and Kyle. We re sure there is a likely explanation, but the rest of us probably won t be accepting it. We’re hoping this is not a sign of things to come from this duo. Finally we got on the road to Lanesboro and the unpleasantly named Highway 250 Campground. The campground is actually quite nice right along the Root River about a half mile outside of Lanesboro. Lead Support Driver Matt was tasked with his first solo grilling opportunity after apprenticing under Jay last year. The bacon cheeseburgers were adequate& actually they were very tasty. Matt is well on his way in his expanded role. Unfortunately, our pre-ride grocery shopper (John) forgot to buy ketchup and mustard. What else may he have forgotten, the rest of us contemplated silently.

After dinner the boys spent an hour getting a campfire smoldering with perhaps the worst campground firewood ever, wet box elder? Justin was relentless in fanning the few flames, but ultimately Kyle jumped in and stoked the flames when everyone was about to give up. That was the toughest work of the day, a task worthy of some of Sherry s famous rhubarb pie before calling it a night. We are certainly well nourished for our first day of riding, hopefully a beautiful ride on the Root River Trail. Stay tuned. 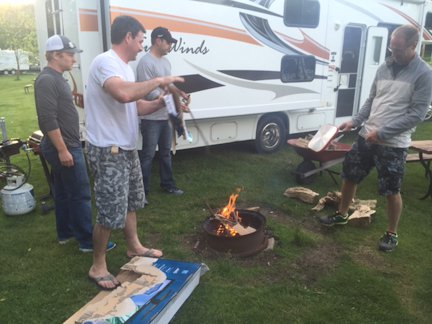