After a peaceful yet chilly night of sleeping, the group awoke around 7am. Coffee was the first thing on everyone’s minds, and a full two pots were consumed before anyone could think about hitting the trails. Justin prepared a breakfast of hot cakes, venison breakfast sausage, and a few fried eggs. All were hungry, and we knew we would need to eat large volumes of pancakes to provide the energy we would need out on the trail. Everyone looks forward to breakfast, especially there at the Akeley campsite sitting next to the 11th Crow Wing Lake. Or is it the 10th? 9th?? We can never remember. But we know it is serene and a great spot for a hot breakfast. During breakfast, we studied the map of the Paul Bunyan and Heartland trails to determine where we would ride.

For this one time, we were glad Dennis was not with us, as he would have likely convinced us there was no need to drive north and ride south with only a 10mph wind. But with winds at 10mph out of the northwest, we were unanimous in the decision to drive the rig north to the Bemidji State Park, and ride southeast bound. It was the best decision of the trip, maybe besides deciding to get ice cream. By the time we got started with the ride, it was after noon. Riding along scenic Lake Bemidji was nice, and with the tailwind it made for efficient pedaling. Justin had iced his knees prior to the day’s ride, and they were holding up well. All seemed well. 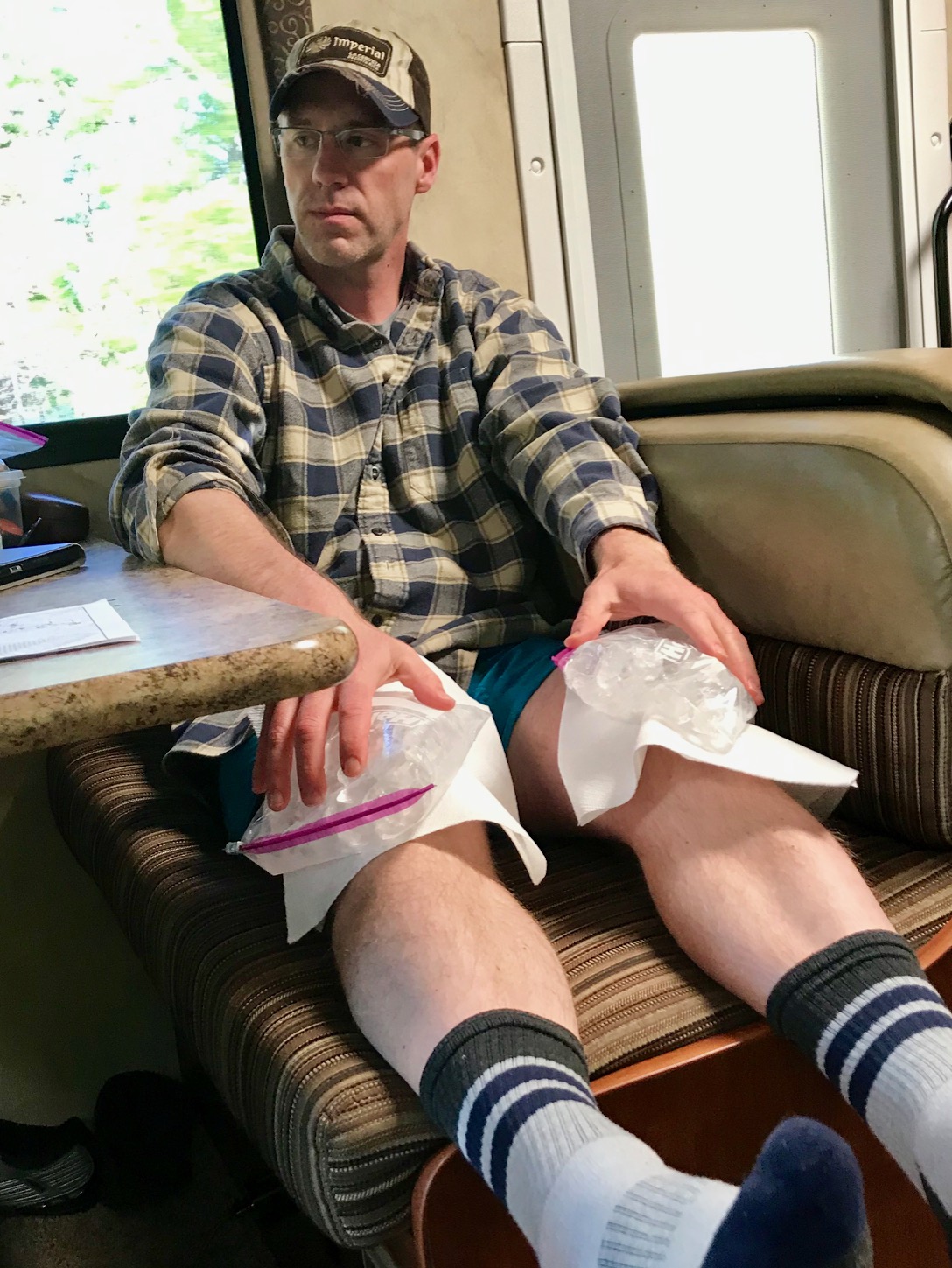 Our first hiccup happened about 18 miles into the ride, when we came upon Matt at a park along the trail. We were thinking he would have some snacks for us, instead informed us the generator was not supplying any power to the motor home. Long story short, after a phone consultation with a motor home technician, we had to give up. We were all crossing our fingers that once we returned to camp and plugged in, we would have electricity but we didn’t know for sure. We had a couple slices of watermelon and refilled our water bottles and hit the trail. It would be another 22 miles to Walker, our next meeting point. Between the motor home debacle and Kyle taking some conference calls, the three riders were split up. John was up ahead, then Justin, then Kyle about a half hour behind. 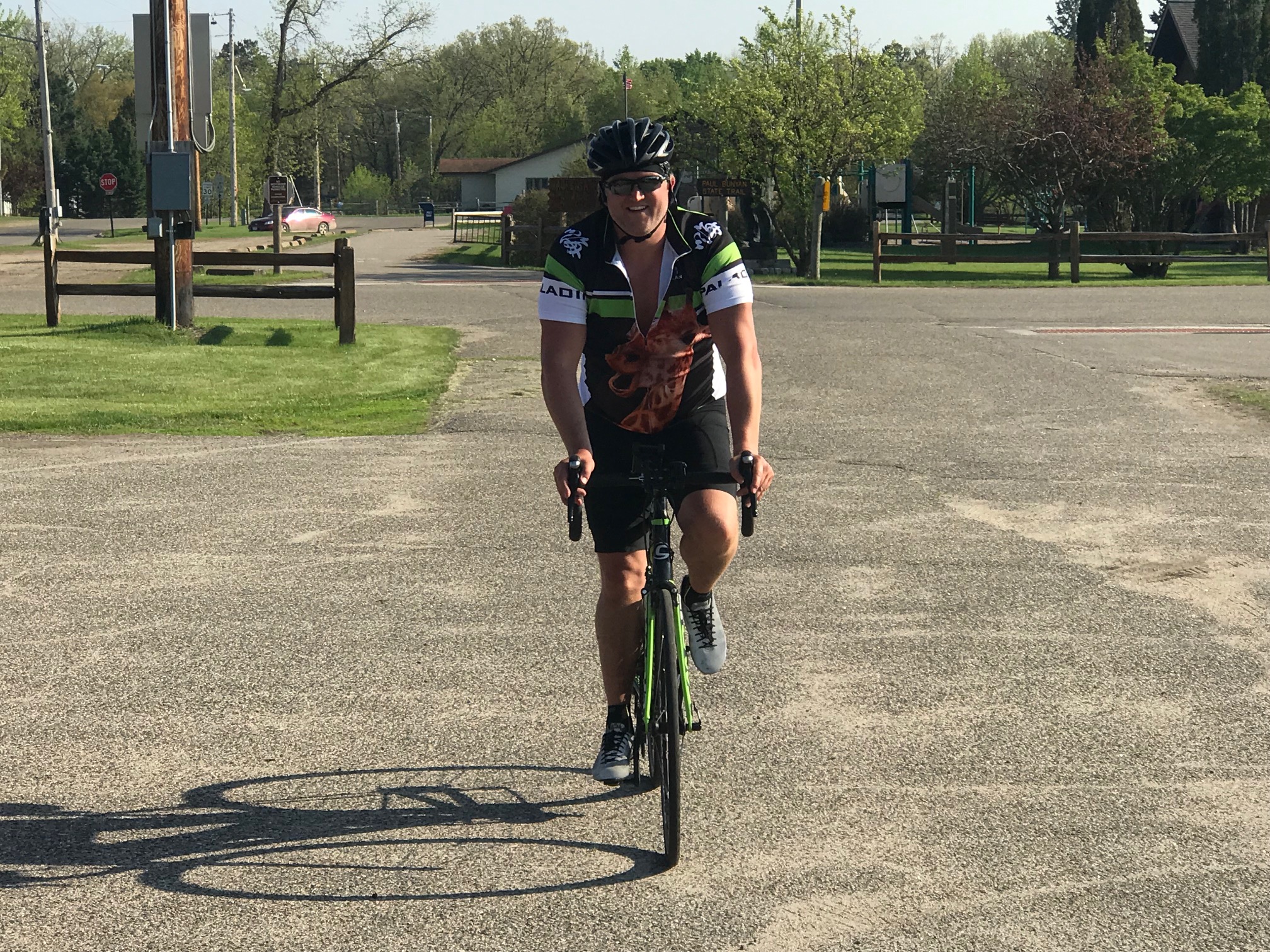 When John rolled into Walker, it was like CEM900 days of old as he could not find the motor home anywhere. He made a bigger deal out of it then it really was, claiming he had rode many extra miles to turn around and find Matt. Justin found the rig without issue, and we sent Kyle a message with directions to find us. We got to the motor home and the generator was running and there was power! Oh the glory! Hot pulled pork nachos here we come! 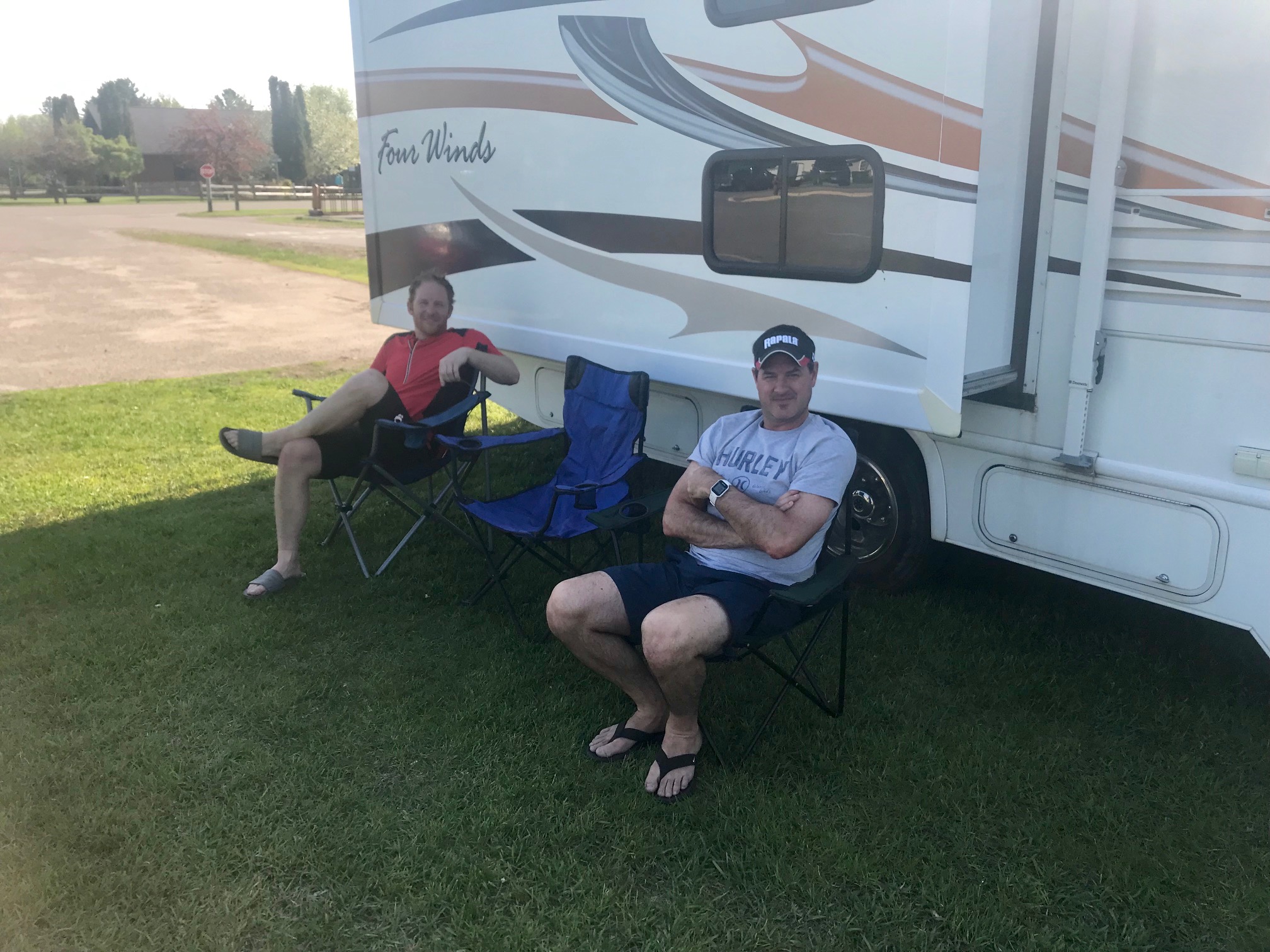 Matt is an amateur electrician, and one way or another he had outsmarted the generator gremlin and restored full power. Kyle had brought 6 pounds of his famous smoked pulled pork, and we satisfied our low energy reserves with hot pork nachos and Cheetos. We examined our route for the final 22 miles, and we had not previously noticed we had to ride through an optional section of the trail we have dubbed the “Johnnykiller.” John was not enthused about this section of trail, as it has several intensely steep climbs, with downhill sections that John said were unsatisfying because they end in blind 90 degree corners. We said “suck it up Johnny,” and he gave in. We were off, and it turned out to be the most enjoyable part of the entire ride.
We again ended our day in Hackensack, and much to our disappointment the ice cream shop we had visited the day before closed at 6pm, and it was 6:05. It’s really the only reason we decided to end in Hackensack, and our disappointment weighed heavy upon us. Thanks to Yelp, we made lemonade with lemons and located another ice cream shop right around the corner. We went in and there were about 10 senior citizens who all looked at us like we were from another planet. Surprisingly it must be rare in Hackensack for 3 men wearing biker shorts and a Matt to stop in for ice cream. But again, it put us all in a jovial mood and we felt good about putting down another 63 miles. 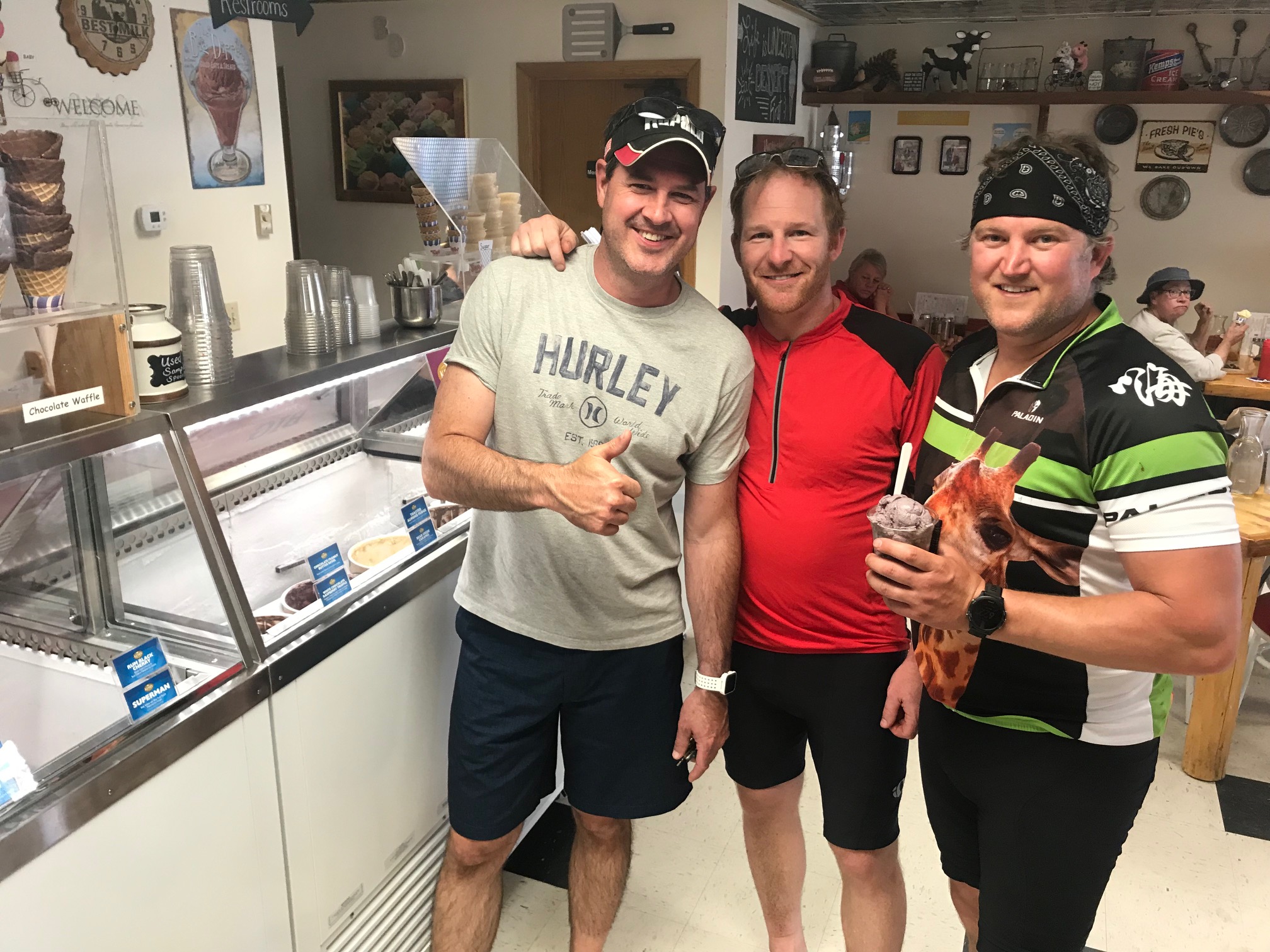 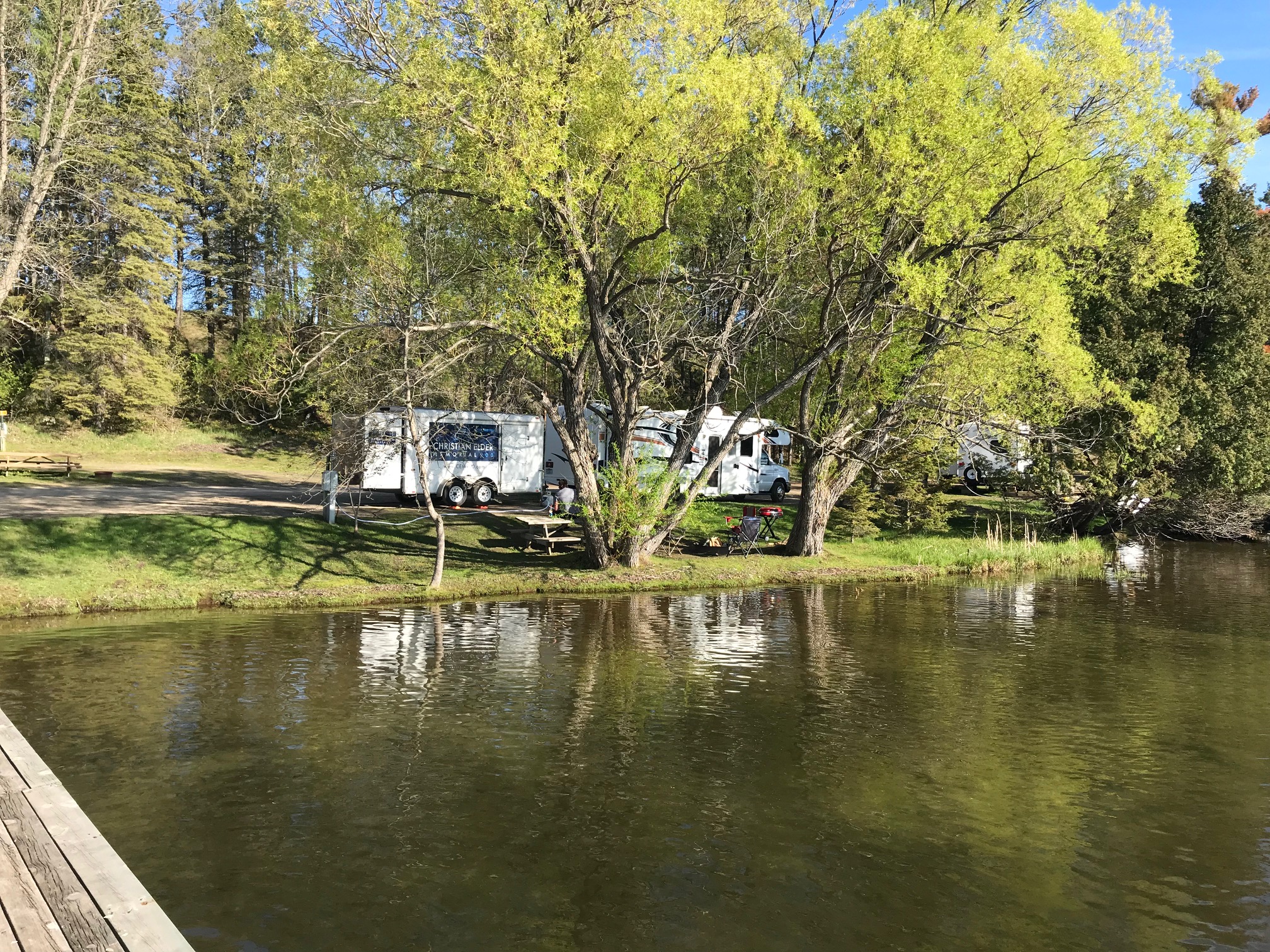 Back to camp we went, and after our ice cream treats we were not really all that hungry. We decided to build a fire and discuss our differing opinions on solving a few of the world’s problems. Matt was frustrated we were not interested in eating the unopened coleslaw, so around 10 pm we all loaded up with another plate of pork and some sweet coleslaw. We said goodnight and hit the rack around 11:30. We have an early morning tomorrow as we intend to hit the trail by 8am.