Somehow the boys found themselves going to bed too late and now having to get up too early! The alarm went off at 6:40am, as our intention was to be on the trail by 8am. Based on historical riding start times on the CEM900, I think we all knew being on the trail at 8 was wishful thinking. But it was our goal, and the time between 6:40 and 8 seems to go by very fast. Most of the riders had to be on the road for home by mid-day, so it was in fact important that we get going quickly. John seemed the most intent on making sure he was ready, in fact we hardly remember even seeing him. Matt was overly eager to prepare us a breakfast of scrambled eggs and sausage, but John declined. Justin and Kyle both were thinking that eggs and sausage sounded pretty darn good, but neither wanted to be the first to say so. So Justin said he will just have some cereal or something. There was an intense look of disappointment on Matt’s face, and I’m not sure if it’s because he really wanted to make breakfast or if he was concerned the sausage and eggs might go to waste. Either way, Kyle came through and said what everyone was thinking, “Well if you’re still willing I could go for some eggs and sausage.” Justin quickly agreed, and within what seemed like a matter of seconds, Matt had prepared a delicious egg/sausage/cheese scramble on top of toast. John still wasn’t hungry and was eager to get going on the day’s ride, and he took off down the trail before Kyle and Justin had even finished eating. It was about 7:50, and amazingly at least one of the riders was already on the trail.

Justin and Kyle took a little more time to eat and get ready, and it was closer to 8:15 before they got riding. But that was fine, as their hunger had been satisfied, and just as importantly preparing the breakfast seemed to satisfy Matt’s support driver instincts. What was not fine was biking from the campsite up to the trail, as for about a quarter mile it is a bumpy, lumpy, pothole filled dirt road. This did not “sit” well with the riders sore backsides. It was the most excruciating quarter mile of the entire ride! Justin got a slight head start leaving the camp, and so the three riders had some solo riding time. Today’s ride would take them from the campsite out to Park Rapids via Nevis and Dorset, and then back. Due to the fact John was a real eager beaver that morning, Justin came upon John a few miles from Park Rapids, and John had already taken a break with Matt and the mother ship in Park Rapids and was on his return leg back to camp. The two chatted for a bit and then Kyle appeared on the horizon, raising his fist in triumph as we knew we were on the home stretch. Or maybe he was still shaking his at the camp host for not properly grading that dirt road. Whichever it was, it was good to see Kyle and it was nice for the three of us to have a quick chat about the ride and how much we have enjoyed it. 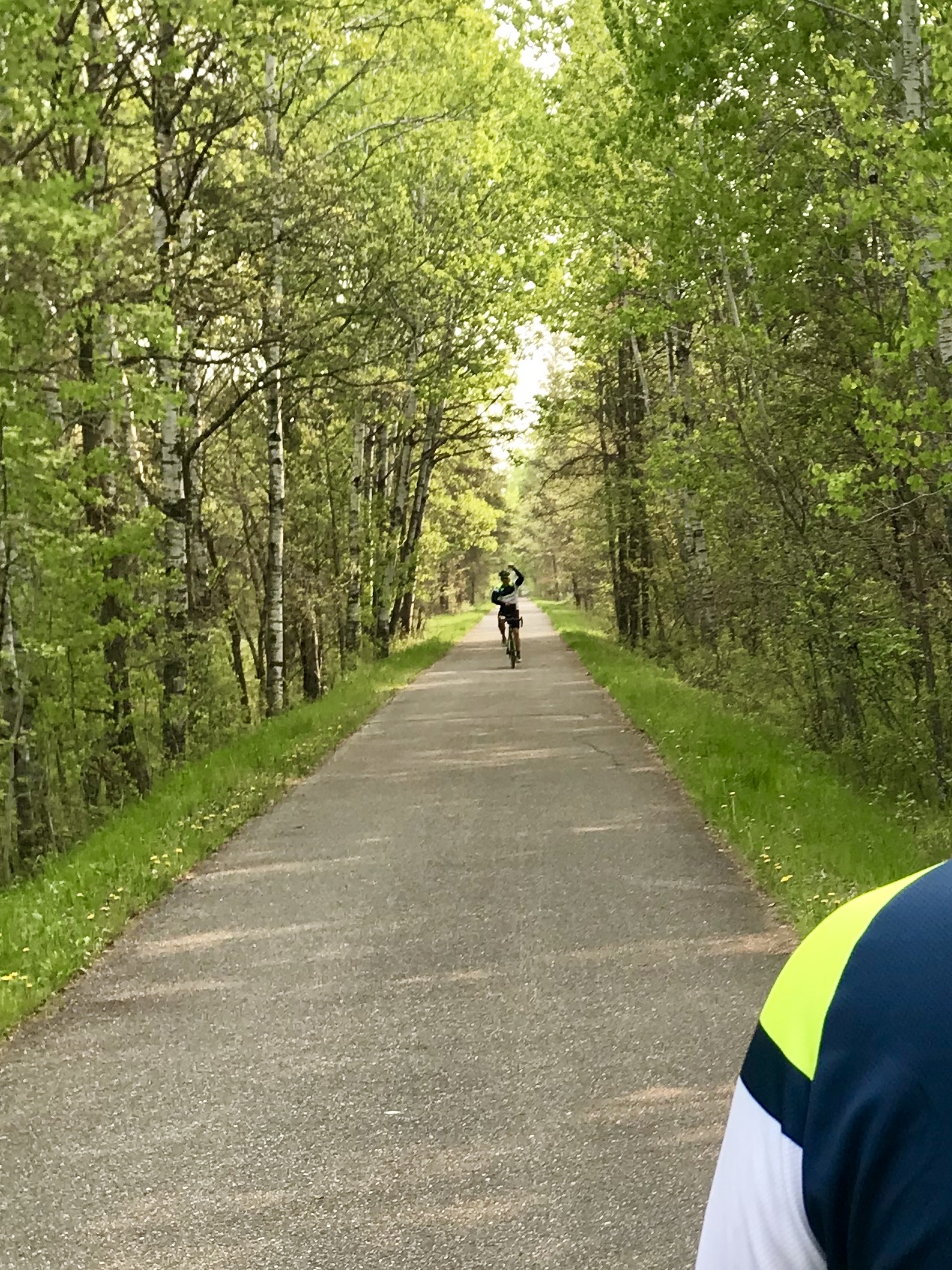 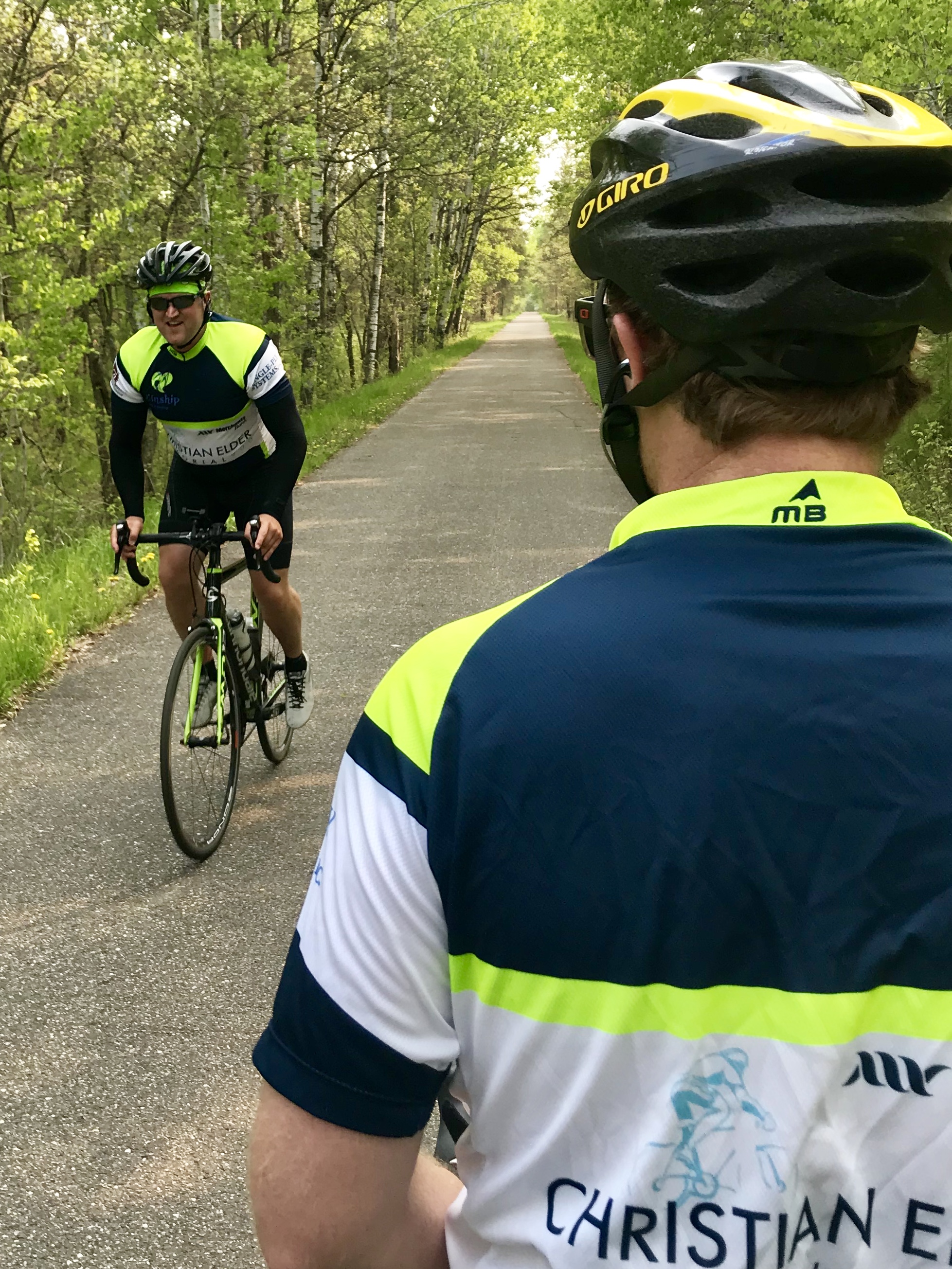 We said our goodbye’s as John took off toward camp, and Kyle and Justin rode the final couple miles to Park Rapids. Matt was there waiting with the mother ship, and we had a nice break. Reality was creeping in that this would be our final leg of our portion of the ride, and it was going to be time to pack our things once we returned to camp. But what a great time we’ve had. Justin and Kyle got back on the bikes and rode together from Park Rapids back to the campsite. One of the most enjoyable things about participating in the ride is just the fact it allows us to catch up with our good friends we don’t see often enough. Time goes by quickly when you have someone to talk to on the bike, and before we knew it we were riding back into camp. We had to ride standing up for that last quarter mile through camp, and celebrated our return with some cold Sun-Drop. Kyle and John had to hit the road quickly, so they showered up and packed and we had to say our goodbyes. Matt and Justin had to wait for a few of the Leg 2 riders to arrive. They took this time to shower, pack their belongings, and…oh wait, I forgot to tell another story.

Our camp host was a real nice person. We first met her as we pulled in on Tuesday afternoon. She was cheery and glad to see us. There was some confusion at check-in with how long we were staying, if we were going to have a second camper at some point, confusion with credit cards, etc. She was nice as could be but did not seem overly on top of things. We also discussed the fact that we would be sleeping in the small trailer that was towed behind the motorhome. She wanted us to park the trailer in a parking lot rather than at our campsite. She looked at it and said, “you sleep in there?” Justin said yes, and told her we need it at our site. She agreed this was acceptable. She stopped by and chatted with us at our campsite many times the first few days. She asked how our riding was going, etc. We talked about how Doug and Ann would be bringing another camper to park right behind the CEM trailer, etc. Fast forward to today, and Matt was at the campsite and John had just returned from riding. Justin and Kyle were still a few miles out. The camp host rode up on her golf cart, asked what campsite they were supposed to be in and told John and Matt that they needed to stop and check in. They looked at each other in puzzlement, and told her that we have been there since Tuesday. She looked at the rig, also in puzzlement, and told them our rig did not look familiar. Matt and John thought they were on a candid camera show. This lady had spoken to us at least a half dozen times in the past few days, stopped by every night to check on us, and knew we were sleeping in the CEM trailer. Now she appeared to have lost all memory of that and wondered who we were. Matt assured her that we had in fact checked in on Tuesday, paid, and that we had been in this very camping spot the entire time. She didn’t seem to buy it, but reluctantly said ok and proceeded to then talk about other things. It was like we were in campsite Twilight Zone. Camp hosts are usually real characters in one way or another, nearly always worth writing about in a story. 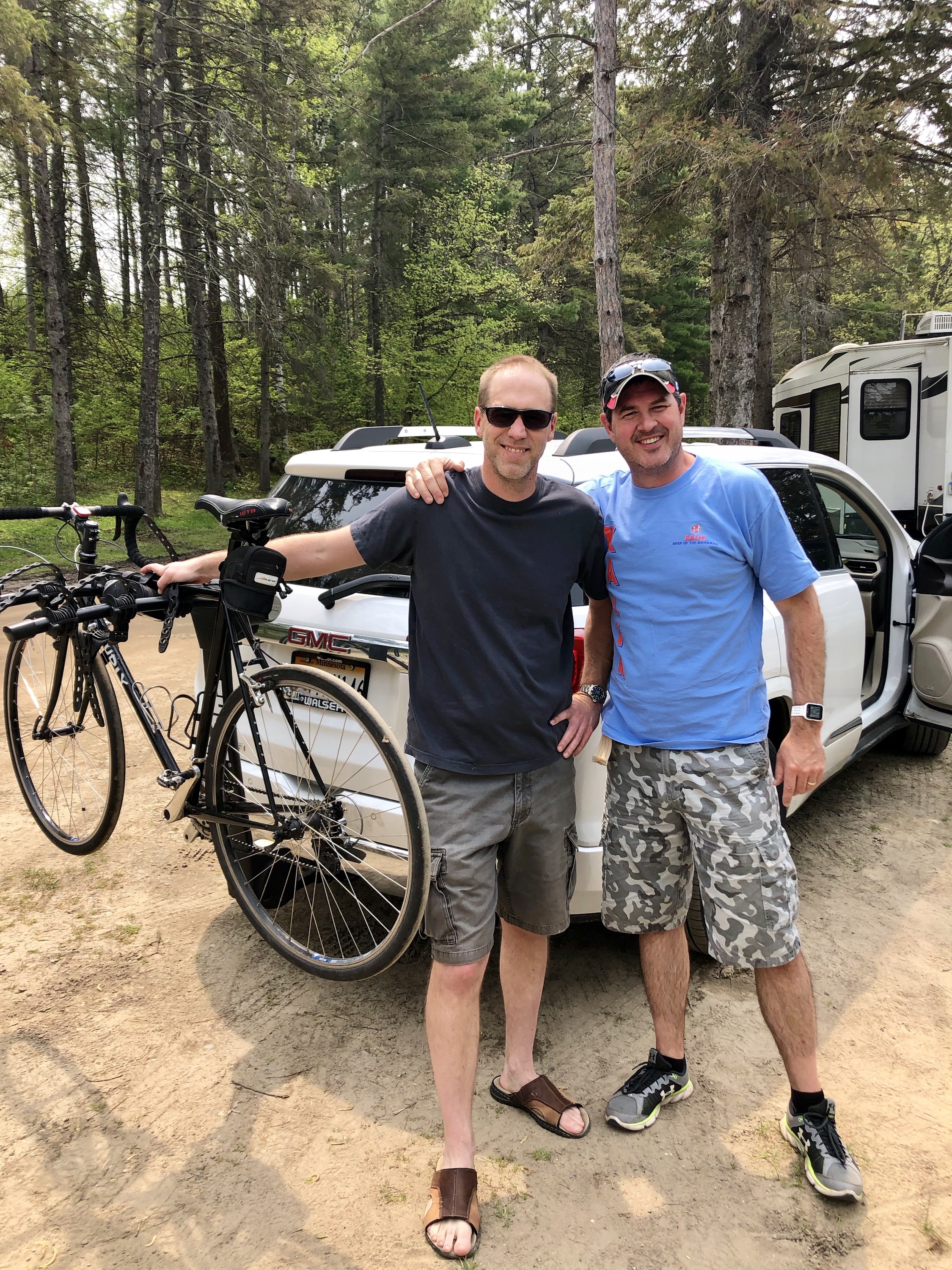 Matt and Justin drove the RV up to the camp sewer dump, as we wanted to give the RV to the Leg 2 riders in a perfectly ready condition. Matt and Justin laughed though at the fact that for some reason John Elder loves dumping the RV, so we thought maybe we should wait and let him do it. Just as we were saying that and had started draining, he and Jack showed up! We laughed again and said we didn’t mean to take away his job! Joking aside it was great to see John E and Jack. We got back to the site and transferred our belongings and had to say goodbye. We wished these two riders well and took off towards home. Leg 1 was over, but not before a stop at Dairy Queen! We were hungry, and thanks to Kids ‘n Kinship, we enjoyed our traditional stop. It sure was different being on the ride without Dennis and John E, and we wished they had been there to enjoy the 3 days with us. But we certainly made the best of it, and after we all got home we were texting each other, lamenting that three of our favorite days of the year were over. 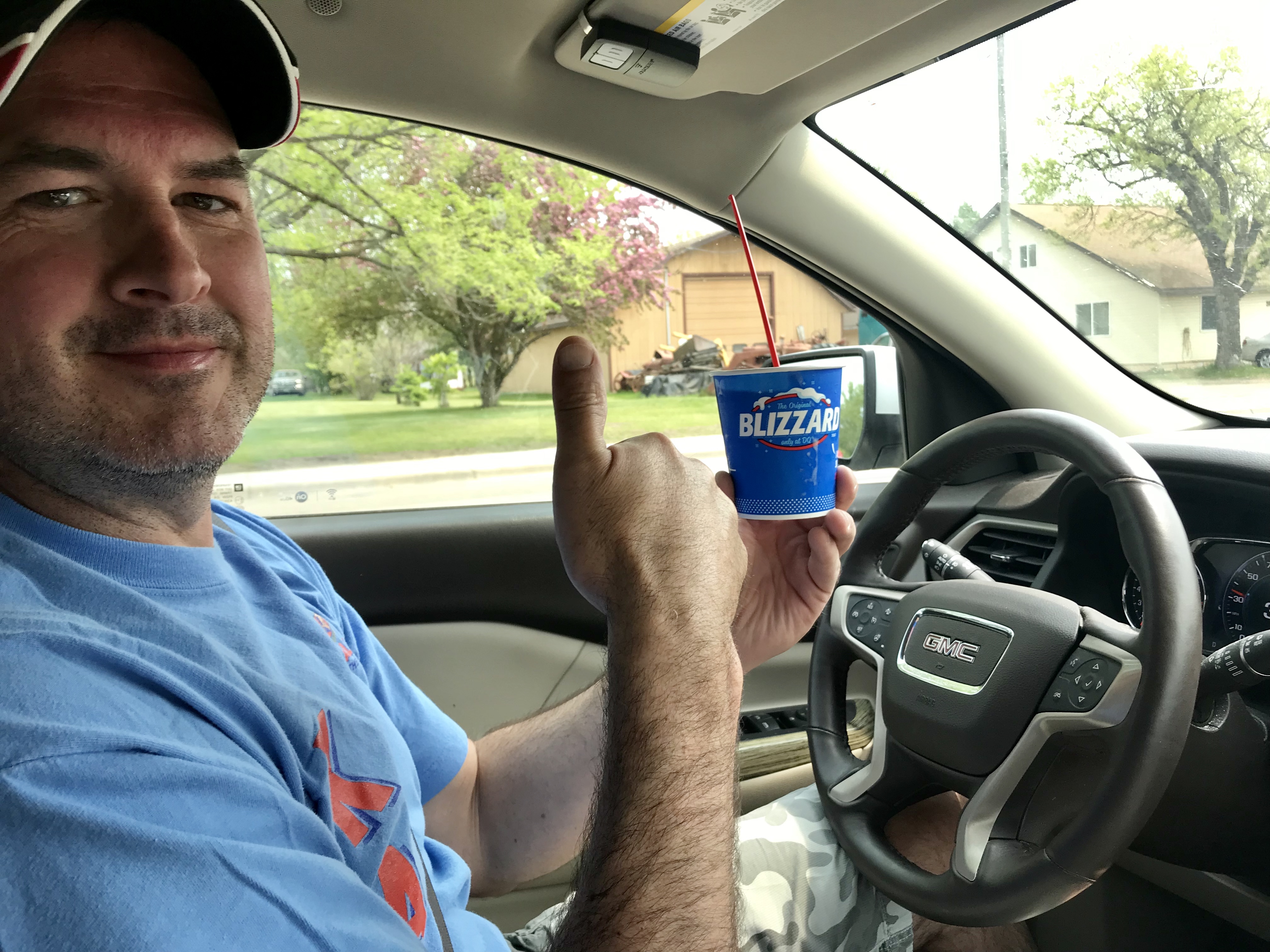